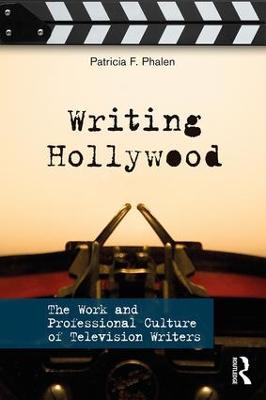 The Work and Professional Culture of Television Writers

Writing Hollywood highlights the writing process in the production of television drama and comedy series in the U.S. The way writers do their jobs is heavily dependent not only on the demands of commercial business, but also on the uncertainties inherent in a writing career in Hollywood. Drawing on literature in the fields of Media Industry Studies and Occupational Culture, Writing Hollywood explains writers' efforts to control risk and survive in a constantly changing environment.

Using data from personal interviews and a six-week participant observation at a prime time drama, Dr. Phalen analyzes the relationships among writers in series television, describes the interactions between writers and studio/network executives, and explains how endogenous and exogenous pressures affect the occupational culture of the television writing profession. » Have you read this book? We'd like to know what you think about it - write a review about Writing Hollywood book by Patricia F. Phalen and you'll earn 50c in Boomerang Bucks loyalty dollars (you must be a Boomerang Books Account Holder - it's free to sign up and there are great benefits!)

Patricia F. Phalen is the Assistant Director of the School of Media and Public Affairs at The George Washington University, USA. She teaches graduate and undergraduate courses on media organizations; the connections between Hollywood and politics; audience research; and the interdependence of media, democracy and culture.

A Preview for this title is currently not available.
More Books By Patricia F. Phalen
View All