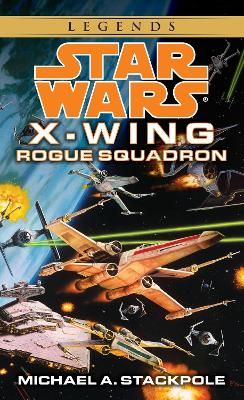 Description - X-Wing 001 by Michael A. Stackpole

They are sleek, swift, and deadly. The are the X-wing fighters. And as the struggle rages across the vastness of space, the fearless men and women who pilot them risk both their lives and their machines. Their mission: to defend the Rebel Alliance against a still-powerful and battle-hardened Imperial foe in a last-ditch effort to control the stars!

Its very name strikes fear into enemy hearts. So when Rebel hero Wedge Antilles rebuilds the legendary Rogue Squadron, he seeks out only the best -- the most skilled, the most daring X-wing pilots. Through arduous training and dangerous missions, he weeds out the weak from the strong, assembling a group of hard-bitten warriors willing to fight, ready to die. Antilles knows the grim truth: that even with the best X-wing jockeys in the galaxy, many will not survive their near-suicidal missions. But when Rogue Squadron is ordered to assist in the assault on the heavily fortified Imperial stronghold of Black Moon, even the bravest must wonder if any at all will survive. . . .

» Have you read this book? We'd like to know what you think about it - write a review about X-Wing 001 book by Michael A. Stackpole and you'll earn 50c in Boomerang Bucks loyalty dollars (you must be a Boomerang Books Account Holder - it's free to sign up and there are great benefits!)

Michael A. Stackpole is the New York Times bestselling author of many titles in the Star Wars universe, including many of the Star Wars X-Wing novels and the New Jedi Order: Dark Tide novels Onslaught and Ruin. When not chained to a desk madly fighting deadlines, he plays indoor soccer, rides a mountain bike, and reads, but not all at the same time. Stackpole lives in Arizona with Liz Danforth and a small pack of Cardigan Welsh corgis.

A Preview for this title is currently not available.
More Books By Michael A. Stackpole
View All