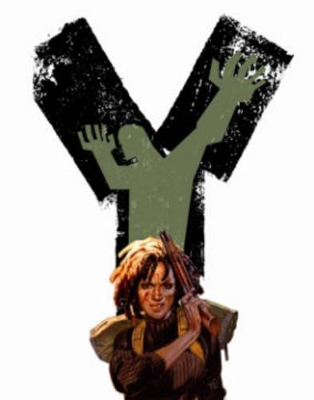 Y- The Last Man is the gripping saga of Yorick Brown, an unemployed and unmotivated slacker who discovers that he is the only male left in the world after a plague of unknown origin instantly kills every mammal with a Y chromosome. Accompanied by his mischievous monkey and the mysterious Agent 355, York embarks on a transcontinental journey to find his girlfriend and discover why he is the last man on Earth.

Now, the entire critically acclaimedY- The Last Man saga written by Brian K. Vaughan, one of the writers of Lost, is collected into a new edition. In this second volume, a Russian space from the International Space Station is returning to earth carrying three passengers- one woman and two men. Could this be the end of Yorick's tenure as last living male? Plus, the group runs up against a roadblock in Arizona where the female remains of the Sons of Arizona militia have cut the interstate to keep out any vestiges of the U.S. government.

» Have you read this book? We'd like to know what you think about it - write a review about Y: The Last Man Book Two TP book by Brian K. Vaughan and you'll earn 50c in Boomerang Bucks loyalty dollars (you must be a Boomerang Books Account Holder - it's free to sign up and there are great benefits!)

Brian K. Vaughan is the Eisner Award-winning co-creator of the critically acclaimed comics series Y- THE LAST MAN and EX MACHINA. He also co-created the Vertigo graphic novel PRIDE OF BAGHDAD and served as a writer and producer for the hit television series Lost. He lives in Los Angeles with his wife and son and their wiener dog Hamburger. Pia Guerra is the Shuster and Eisner Award-winning penciller and co-creator of Y- THE LAST MAN, a book she will always look back on as a labor of love crossed with a trial of Hercules. She currently lives in Vancouver with her very talented husband Ian Boothby, who helped write this bio for her.