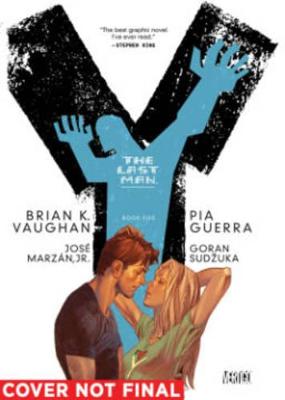 A MAN FOR ALL SEASONS

In 2002, the world changes forever. Every man, every boy, every mammal with a Y chromosome everywhere on Earth suddenly collapses and dies. With the loss of nearly half the planet's population, the gears of society grind to a halt, and a world of women is left to pick up the pieces and try to keep civilization from collapsing entirely.

The "gendercide," however, is not absolutely complete. For some unknown reason, one young man named Yorick Brown and his pet male monkey, Ampersand, are spared. Overnight, this anonymous twenty-something becomes the most important person on the planet - the key, it is hoped, to unlocking the secret of the mysterious sex-specific plague.

For Yorick himself, the cause of the epidemic is less important than the fate of his beloved fiancee, Beth. Now, after nearly four years and countless grueling miles, the final answers are about to be revealed-and the truth may be more than any man could bear.

In the conclusion to their acclaimed Vertigo series Y- The Last Man, writer Brian K. Vaughan and artist Pia Guerra bring to vivid life the age-old speculation- What would really happen to the last man on Earth?

» Have you read this book? We'd like to know what you think about it - write a review about Y The Last Man TP Book Five book by Brian K. Vaughan and you'll earn 50c in Boomerang Bucks loyalty dollars (you must be a Boomerang Books Account Holder - it's free to sign up and there are great benefits!)

Brian K. Vaughan is the Eisner and Harvey Award-winning co-creator of many critically acclaimed comic books, including Saga, Y- THE LAST MAN, EX MACHINA, Runaways and PRIDE OF BAGHDAD. A professional comics writer since his days as an undergraduate film student at New York University, Brian has written every major DC and Marvel character from Batman to the X-Men. He's also written several screenplays, stage plays and short stories, but mostly, he likes to work on the funnybooks. He also served as writer and story editor on the hit TV series Lost.