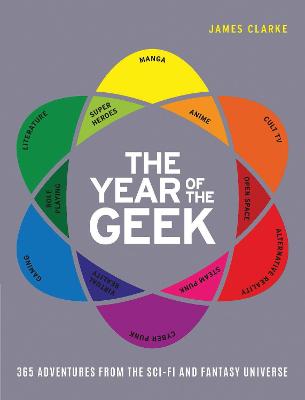 The Year of the Geek

365 Adventures from the Sci-Fi Universe

Description - The Year of the Geek by James Clarke

The Year of the Geek is a fascinating look into geek culture. Each day will tell a different story from the sci-fi universe, from famous franchises and figures such as Star Wars, The Matrix, Peter Jackson and Luc Besson, to lesser known stories, including the French cult classic City of Lost Children, the Japanese anime Akira and bestselling German novelist, Marcus Heitz. With text written by self-confessed geek James Clarke and accompanied by over 100 infographics that have been specially commissioned for this book, The Year of the Geek celebrates all things geek in a new and intriguing way.

Buy The Year of the Geek by James Clarke from Australia's Online Independent Bookstore, Boomerang Books.

Book Reviews - The Year of the Geek by James Clarke

» Have you read this book? We'd like to know what you think about it - write a review about Year of the Geek book by James Clarke and you'll earn 50c in Boomerang Bucks loyalty dollars (you must be a Boomerang Books Account Holder - it's free to sign up and there are great benefits!)

James Clarke is a journalist and writer whose work has appeared in SciFiNow, 3DArtist, All About History and Moviescope. His books include The Pocket Essentials: Steven Spielberg and The Virgin Film Guide: War Films. He has also contributed to the Rough Guide: Film and his most recent book is Bodies in Heroic Motion: The Cinema of James Cameron.

A Preview for this title is currently not available.
More Books By James Clarke
View All

An Essay, Wherein a Method Is Humbly Propos'd for Measuring Equal Time with the Utmost Exactness; Without the Necessity of Being Confin'd to Clocks, Watches, or Any Other Horological Movements; In Order to Discover the Longtitude at Sea.
$31.20 $34.67

A Treatise on the Prevention of Diseases Incidental to Horses, from Bad Management in Regard to Stables, Food, Water, Air, and Exercise. to Which Are Subjoined Observations on Some of the Surgical and Medical Branches of Farriery. by J. Clark, ...
$70.82 $78.69