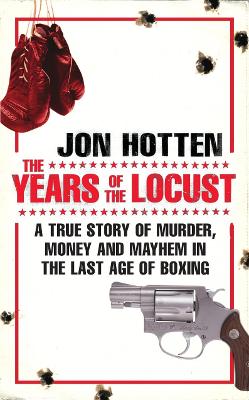 The Years of the Locust

A True Story of Murder, Money and Mayhem in the Last Age of Boxing

Description - The Years of the Locust by Jon Hotten

The Years of the Locust is a true story of intrigue, paranoia, murder and money set in the shimmering cities of America's South in the 1990s. It's the story of two men who never should have met, and when they did, one killed the other. There are walk-on parts for Don King, George Foreman, the FBI and a fallen NFL hero, yet it's the two central characters - sociopathic door-to-door-sales-king-turned-boxing-promoter Rick 'Elvis' Parker and his loyal, naive and ultimately incorruptible fighter Tim Anderson - that make this story extraordinary and unforgettable.It would be impossible to invent a man like Rick Parker, a freakishly fat ginger-haired giant who modelled his personal style on Elvis Presley and wanted to become the next Don King. Don himself told Rick how to do it - find a white man who could become the heavyweight champion of the world. Then Rick met Tim Anderson, a handsome, funny former baseball pro - was he the fighter to take Parker all the way? Rick left a trail of fixed fights and violent mayhem all across the South, but his dream stayed out of reach. By the end of his reign of terror Tim would be broke, poisoned and facing the hardest choice of all. And now Tim is doing life without parole in a state prison, and Rick - well, Rick's dead.By juxtaposing the lives of these two extraordinary men, The Years of the Locust turns a remarkable, riotous true-crime story into a profound examination of chance, choices and remorse - one that's scary, sad and blackly, bleakly funny.

Buy The Years of the Locust by Jon Hotten from Australia's Online Independent Bookstore, Boomerang Books.

Book Reviews - The Years of the Locust by Jon Hotten

» Have you read this book? We'd like to know what you think about it - write a review about Years of the Locust book by Jon Hotten and you'll earn 50c in Boomerang Bucks loyalty dollars (you must be a Boomerang Books Account Holder - it's free to sign up and there are great benefits!)

John Hotten is the author of Unlicensed- Random Notes from Boxing's Underbelly and Muscle- A Writer's Trip Through a Sport With No Boundaries, which was longlisted for the William Hill Sports Book of the Year award. A former editor of Kerrang!, he has written for the Guardian, the Sunday Times, Esquire and Punch.

A Preview for this title is currently not available.
More Books By Jon Hotten
View All