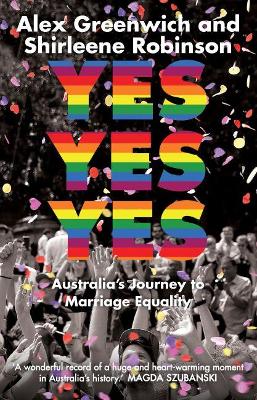 A compelling, moving account of the long journey to marriage equality in Australia.

Yes Yes Yes, written by two advocates intimately involved in the struggle for marriage equality, reveals the untold story of how a grassroots movement won hearts and minds and transformed a country. From its tentative origins in 2004, through to a groundswell of public support, everyday people contributed so much to see marriage equality become law.

The book captures the passion that propelled the movement forward, weaving together stories of heartbreak, hope and triumph. It is based on personal memories and more than forty interviews with key figures and everyday advocates from across Australia. It covers the movement's origins in 2004, when the Marriage Act of 1961 was amended to exclude same-sex couples, through to the unsuccessful High Court challenge, a public vote in 2017 and the Parliamentary aftermath. It reminds us that social change is possible and that love is love.

'A wonderful record of a huge and heart-warming moment in Australia's history.' - Magda Szubanski

'Winning the freedom to marry and changing hearts and minds - and the law - is never easy, even in a progressive democracy like Australia. By sharing the ins and outs and behind the scene stories from Australia's long and dramatic journey to marriage equality, Alex Greenwich and Shirleene Robinson offer valuable inspiration and instruction to all those heroes working tirelessly across the world to gain much-needed human rights wins and turn NOs into overwhelming and vitally important declarations of YES YES YES in support of equality!' - Evan Wolfson, Founder, Freedom to Marry, USA

'In Yes Yes Yes: Australia's Journey to Marriage Equality, Shirleene Robinson and Alex Greenwich provide a forensically detailed inside account of the Yes campaign...Robinson and Greenwich's book is detail-rich and meticulously charted: a comprehensive historical document of an important moment in Australian life.' - Sharon Verghis, The Australian

'...ought to be compulsory reading for anyone who is interested in social and political change in Australia.' - Graham Willett, The Age 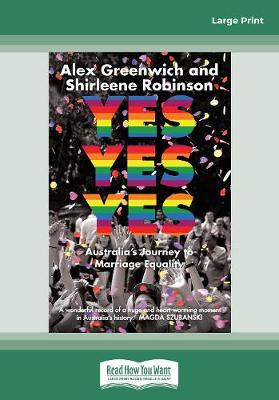 » Have you read this book? We'd like to know what you think about it - write a review about Yes Yes Yes: Australia's Journey to Marriage Equality book by Shirleene Robinson and you'll earn 50c in Boomerang Bucks loyalty dollars (you must be a Boomerang Books Account Holder - it's free to sign up and there are great benefits!)


A Preview for this title is currently not available.
More Books By Shirleene Robinson
View All

Yes Yes Yes: Australia's Journey to Marriage Equality
No Stock on Hand, Supplier Has No Due Date for Supply.
$49.49 $54.99

Serving in Silence: Australian LGBT servicemen and women
No Stock on Hand, Supplier Has No Due Date for Supply.
$49.49 $54.99

Gay and Lesbian, Then and Now: Australian Stories from a Social Revolution
Available, ships in 7-10 business days
$25.49 $29.99