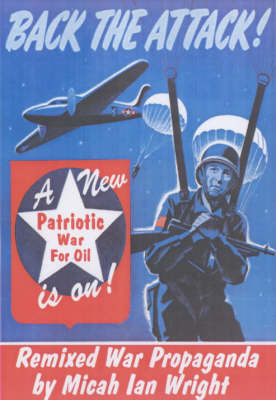 You Back The Attack!

Description - You Back The Attack! by Micah Ian Wright

One of the posters in this collection features a young blond woman sitting at a typewriter and saluting, but the original World War II era text urging typists to be productive for the war effort has been changed to read, "You write what you're told! Thanks, corporate news! We couldn't control the pe

Buy You Back The Attack! by Micah Ian Wright from Australia's Online Independent Bookstore, Boomerang Books.

Book Reviews - You Back The Attack! by Micah Ian Wright

» Have you read this book? We'd like to know what you think about it - write a review about You Back The Attack! book by Micah Ian Wright and you'll earn 50c in Boomerang Bucks loyalty dollars (you must be a Boomerang Books Account Holder - it's free to sign up and there are great benefits!)

Micah Wright, a former Airborne Ranger in the U.S. Army and an award-winning children's animation writer, currently writes StormWatch: Team Achilles, a blood-and-guts vision of human special forces soldiers who do battle with out-of-control superheroes and the sinister Military-Corporate Complex that creates these supersoldiers gone mad. Kurt Vonnegut is one of the most prolific and respected authors of the 20th century. His novels include Slaughterhouse Five and Cat's Cradle. Howard Zinn, a famed historian and activist, is the author of the best-selling and critically acclaimed A People's History of the United States and ten other books including the Zinn Reader (also available from Turnaround). He received the Eugene V. Debs and Lannan Foundation awards for his writing and political activism.

A Preview for this title is currently not available.
More Books By Micah Ian Wright
View All