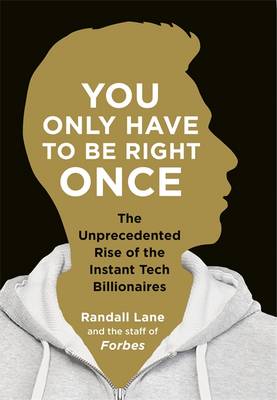 You Only Have To Be Right Once

The Unprecedented Rise of the Instant Tech Billionaires

Description - You Only Have To Be Right Once by Randall Lane

The ultimate insider look at the newest titans of tech - and what you can learn from their success. In 2007, twenty-one-year old David Karp launched Tumblr on a whim. By 2012, it had become one of the top ten online destinations, drawing 170 million visitors. By 2013, Yahoo had acquired it for over $1 billion. Just like that, a kid without a high school diploma was worth over a quarter billion dollars. And he's not the only one . . . Silicon Valley's newest billionaires are a unique and unconventional breed of entrepreneur- young, bold, and taking the world by storm with their extreme speed, insatiable hunger, and progressive leadership. These whiz kids (and, to be fair, a few adults) turn just one brilliant insight into money at a rate never before seen - creating companies that, even with no revenue, garner insane valuations. With unique insider access, Forbes has dug in to find what these super-entrepreneurs say about their own success. This book, introduced, edited, and updated by Forbes editor Randall Lane, is the first comprehensive look at who these instant tech billionaires are and how they achieved their quick wins. With sixteen illuminating pieces, including two never-before published features, we get behind-the-scenes examinations of the founders of Tumblr, Twitter, and Spotify; of Paypal's Elon Musk, Palantir's Alex Karp and Snapchat's Evan Spiegel. You Only Have to Be Right Once is the definitive collection of everything we can learn from these incredible game changers and what their next moves spell for the future of business. 'Wedged into a corner, Sean Parker sported the removed look of someone at a crowded party who doesn't know many people. Which, at a media soiree at New York's clubby Monkey Bar on October 4, 2011, happened to be the case. Given that two weeks prior, Parker became the first person to adorn the cover of Forbes since I returned as the editor, it seemed right to introduce myself. It's not that the Forbes cover had been a valentine- it revealed the polymath who had helped shape Napster, Facebook and Spotify for all his quirks and faults. But until that story, the world equated him with the villainous character portrayed by Justin Timberlake in David Fincher's movie The Social Network. Now Parker stood before me as a brash actor in a story that has only a little to do with Facebook and feels a hundred times bigger- how a handful of young digital swashbucklers shrugged off the Great Recession to transform how industries operate and fortunes get made. The day after my conversation with Parker, Steve Jobs passed away. Jobs had epitomized the old new guard, one of a trinity of tech entrepreneurs - with Bill Gates and Michael Dell - who two generations earlier, while themselves in their twenties, proved the disruptive power of technology. This narrative isn't new. In this round, however, the underlying drivers have accelerated exponentially. This new model of Young Turk isn't merely comfortable with technology - he can't remember a world without the Internet. Accordingly, he's no longer content merely conquering the technology space - every industry is now the technology space, whether hotels or music or transportation. And thus ripe for the pillaging . . . '

Buy You Only Have To Be Right Once by Randall Lane from Australia's Online Independent Bookstore, Boomerang Books. 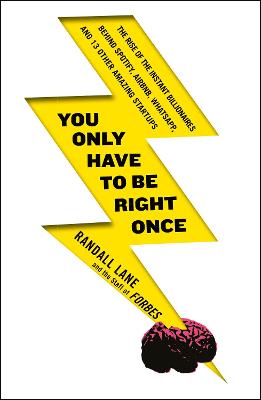 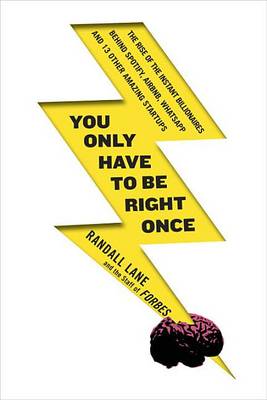 » Have you read this book? We'd like to know what you think about it - write a review about You Only Have To Be Right Once book by Randall Lane and you'll earn 50c in Boomerang Bucks loyalty dollars (you must be a Boomerang Books Account Holder - it's free to sign up and there are great benefits!)

Randall Lane is the editor of Forbes and the author of The Zeroes: My Misadventures in the Decade Wall Street Went Insane. Since 1917, Forbes has provided leaders with strategic insight and information. It is the largest business magazine in the world, with 6.1 million readers in the United States and more than thirty international editions.

A Preview for this title is currently not available.
More Books By Randall Lane
View All