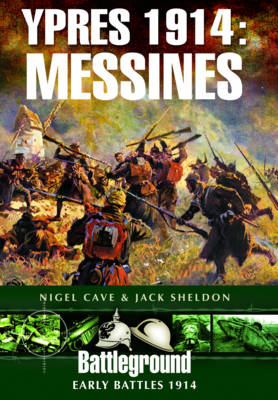 Three Battleground Europe books on Ypres 1914 mark the centenary of the final major battle of the 1914 campaign on the Western Front. Although fought over a relatively small area and short time span, the fighting was even more than usually chaotic and the stakes were extremely high. Authors Nigel Cave and Jack Sheldon combine their respective expertise to tell the story of the men British, French, Indian and German - who fought over the unremarkable undulating ground that was to become firmly placed in British national conscience ever afterwards. At the end of October 1914 an increasingly desperate Falkenhayn, aware that his offensive in Flanders had stalled, decided to make one final effort to break through the Allied lines south of Ypres. Pulling together a large strike force, the so-called Army Group Fabeck, he launched a violent offensive designed to capture the Messines Ridge and to use this dominating terrain as a springboard for a further advance. Inadequately resourced, assembled in a rush, this thrust was soon in trouble. Confused fighting in the wooded areas to the south of the Menin Road slowed the advance and initial attempts to gain a foothold on the ridge failed. A supreme effort by the men of the 26th Infantry Division ultimately brought about the capture of the town of Messines and similar heroics by the Bavarian 6th Reserve Division led to the fall of Wytschaete, but it was all in vain. Yet again a valiant Allied defence had buckled, but not broken. 125 b/w pictures ALL TITLES IN THIS SERIES: 9781781591994 Ypres 1914: Langemarck 9781781592014 Ypres 1914: Messines 9781781592007 Ypres 1914: The Menin Road

» Have you read this book? We'd like to know what you think about it - write a review about Ypres 1914 - Messines book by Jack Sheldon and you'll earn 50c in Boomerang Bucks loyalty dollars (you must be a Boomerang Books Account Holder - it's free to sign up and there are great benefits!)

Nigel Cave is the long standing editor of the WW1 Battleground Europe series and the author of numerous Great War books currently in print with P&S. Nigel is arguably one of the most respected WWI historians alive today. As well as being a consultant on many P&S titles, he has also presented a series of DVDs with Ed Skelding on Walking the Western Front, also with P&S.